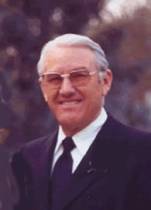 Joseph William Lehman was born March 20, 1920 in Sioux Falls, South Dakota, the son of Mr. and Mrs. C. W. Lehman. He attended grade school and high school in his birth city, and married a local girl, Rose, daughter of Mr. and Mrs. John Picasso. Bill served as an American pilot in World War II in the US Air Force Air Transport Command, flying 65 missions over the “hump” from Assam, India, to various airports in China.

Upon his return to his home, he discovered his bride had become a Seventh-day Adventist in his absence. Intent on proving Rose’s new-found religion a farce, he soon studied himself into her church, and then enrolled in the ministerial course at Union College, Lincoln, Nebraska. He graduated in 1951, when he and Rose began their ministry in Texas, and started a family with the birth of their daughter Nona. He served churches in San Antonio, Houston, and Corpus Christi. (See the report of his move to Corpus Christi.)

In the late 1950s Bill and his family were missionaries in Rwanda. (See the notice of their leaving for Africa, originally planned for the Belgian Congo.) Returning home, he pastored in five North American Union Conferences from 1960 to 1985–including several years in Canada as a revivalist and a “pastor’s pastor.” (See his article from 1979, “Why a Week of Prayer?” recalling a college experience.) Many of his sermons in the 1970s and 1980s were recorded, and continued to bless many in their audio and transcribed forms. In his retirement, he continued a ministry of speaking and counseling until recurrent health problems led him to fully retire. Even then, the Dakota farm boy still enjoyed puttering his tractor around their Ozark country home.

In his retirement, he wrote a book The Matchless Charms of Christ with thoughts based on a sermons series, and inspired by his love for studying the Scriptures and the writings of Ellen White.

God blessed Pastor Bill with the gift of teaching. He was able to make the truths of the Bible plain and relevant to the current challenges, covering topics that are of crucial importance to those living in our time. His deepest burden was to present the matchless love of the Father, and His ample provision to supply our deepest soul need through His Son, the Lord Jesus Christ. Christ is the center of each study. He had a real heart love for people, and he longed to see them respond to the pleadings of our Heavenly Father: “Give me thine heart….” Proverbs 23:26.

Other books under his name have been published posthumously from transcriptions of his sermon series.

Often Pastor Bill wove his life events into his sermons. You will especially appreciate his testimony recorded in his talk, “From Legalism to Grace.”

One interest will prevail…

God’s people should regard the message of Christ’s righteousness with the utmost importance. Ellen White made a prediction that as we approach closer to the close of probation, “One interest will prevail, one subject will swallow up every other,—Christ our righteousness.” (Review and Herald, December 23, 1890, Art. B, par. 19.)

Satan will do everything he can to take the minds of God’s people off of this subject, for he knows that once the people embrace this marvelous message, his time is short.